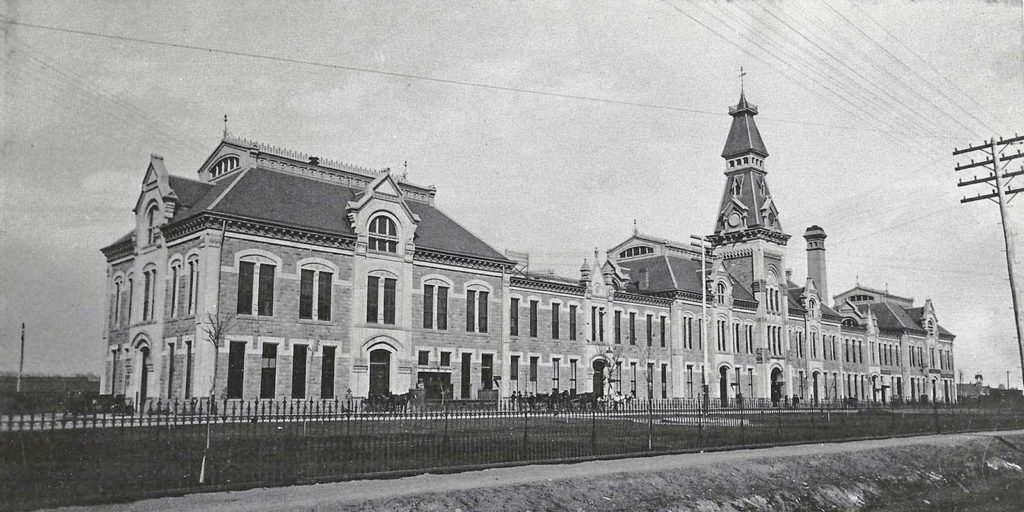 Denver Union Station first opened its doors on June 1, 1881 as Denver Union Depot, located on the north-west side of 17th Street and Wynkoop Street. Union Depot and Railroad Company of Colorado built Denver Union Depot at a cost of $525,000 (equivalent to $13 mil today). The building was 500 ft long by 65 ft wide, featuring a grand central structure with a 180 foot wooden clock tower designed by Kansas City architect William E. Taylor. 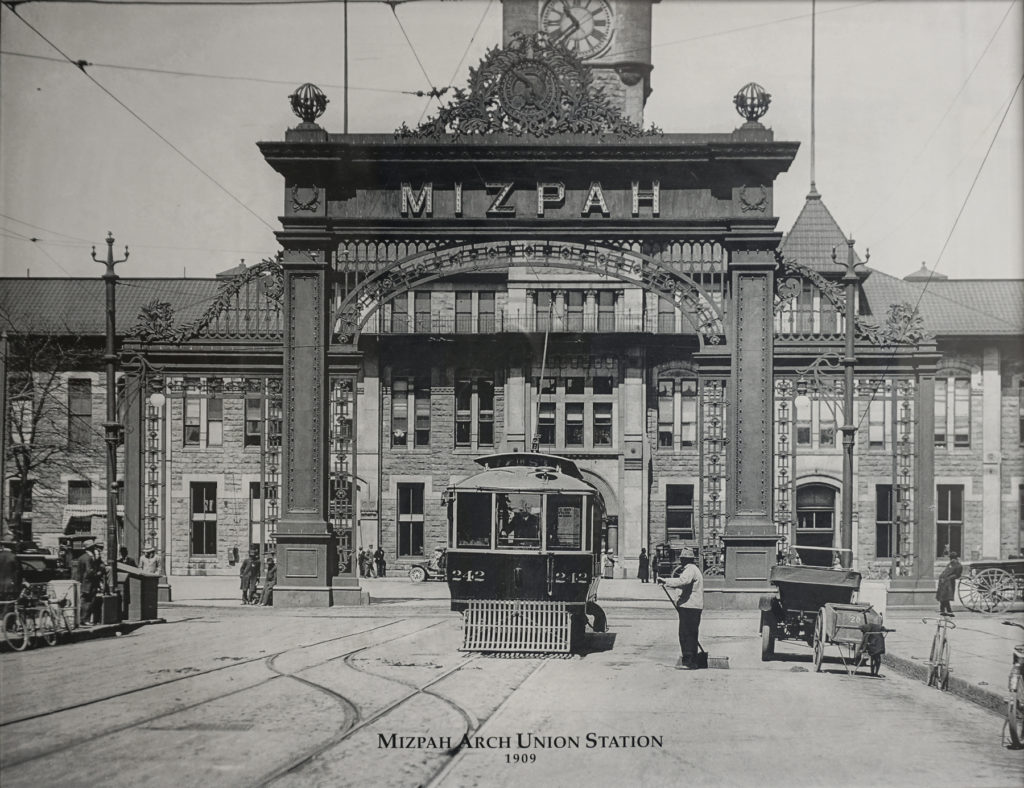 The Mizpah Arch, formerly the Welcome Arch, was dedicated on July 4, 1906 by then Mayor Robert Speer. This large, decorate structure, also known as “Denver’s Front Door,” was built from roughly 70 tons of steel, measured 65 feet tall at a cost of $22,000 (approx $614,000 today) was placed in front of Union Depot to greet visitors to Denver. It was 100 feet wide with an ornate clock on top and over 2,000 light bulbs illuminated it. Originally, the Mizpah Arch had the word”welcome” on both sides and later the Hebrew word for the connection between separated people – “Mizpah” replaced welcome on the departure side. The Mizpah Arch was developed by local business owners but was ultimately torn down in 1931 due to its condition and size making it a traffic hazard 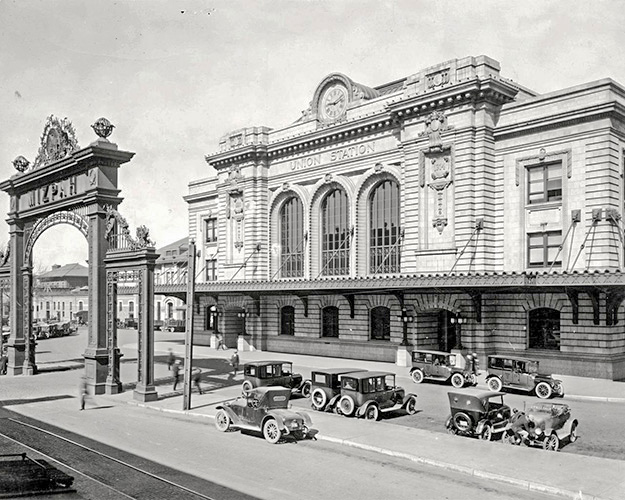 A fire on March 18, 1894 destroyed the central wooden clock tower and was replaced with a stone clock during the rebuild. In 1914, the current neoclassical Beaux Arts/Renaissance Revival Building, designed by local architects Aaron M. Gove and Thomas F. Walsh replaced the rebuild from the fire. The new building project began in 1914 and took three years to complete. The new grand hall building was renamed Denver Union Station and opened in July 1917. 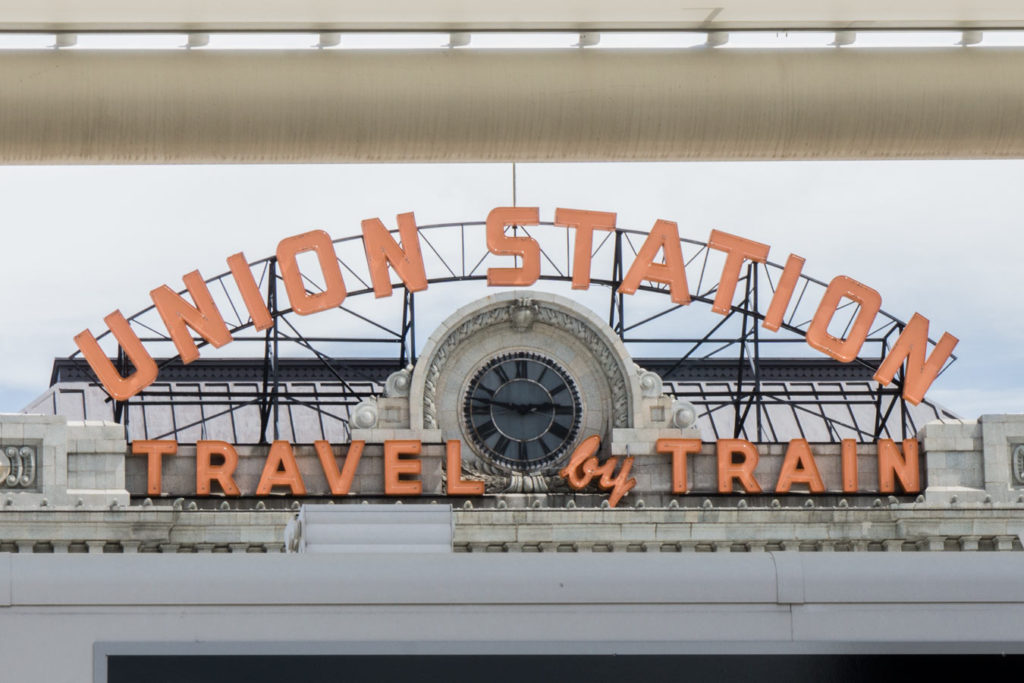 In 1952, Denver Union Station saw the addition of the symbolic orange Union Station – Travel by Train sign added to the main building clock.

Before the RTD purchased Denver Union Station in 2001, train travel diminished to Amtrak’s California Zephyr traveling from Chicago to Oakland and the Winter Park ski train. With little train activity at Denver Union Station, it even became a night club in the early 2000’s. 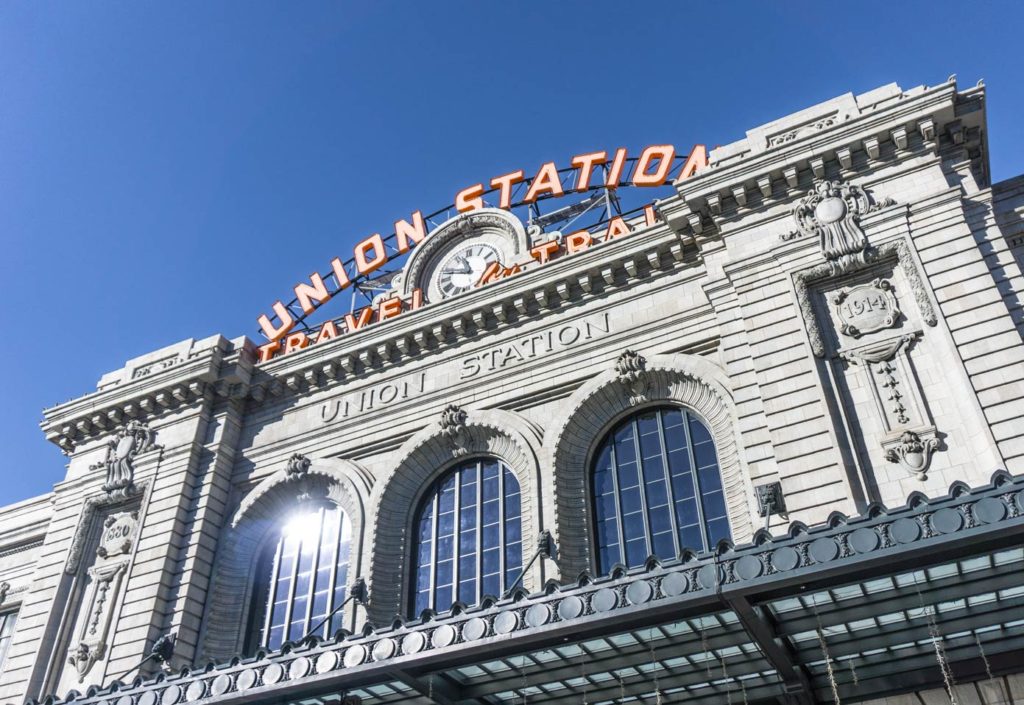 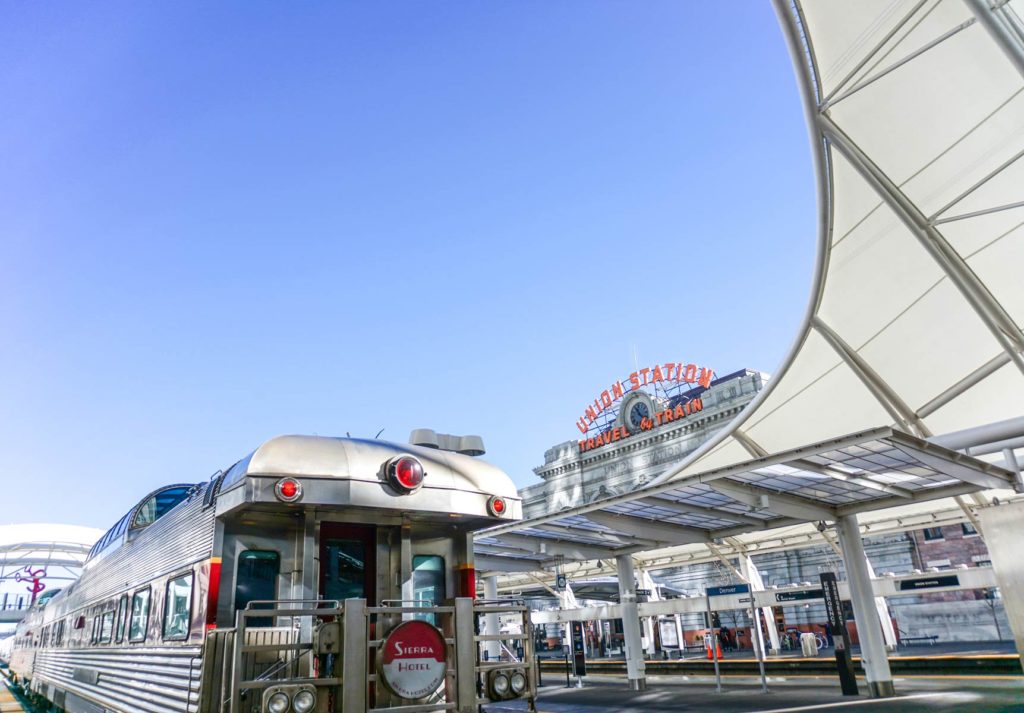 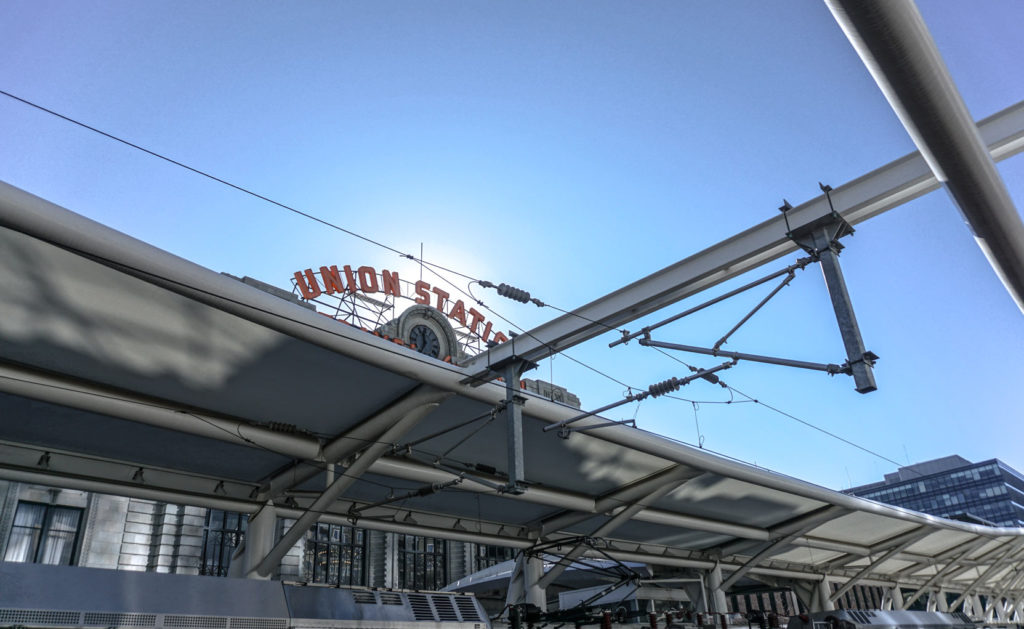 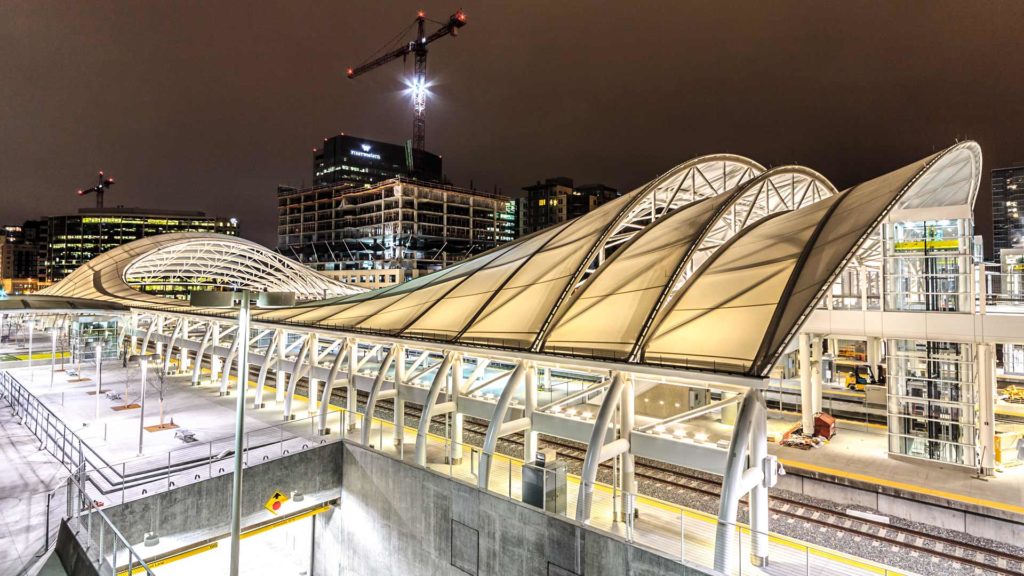 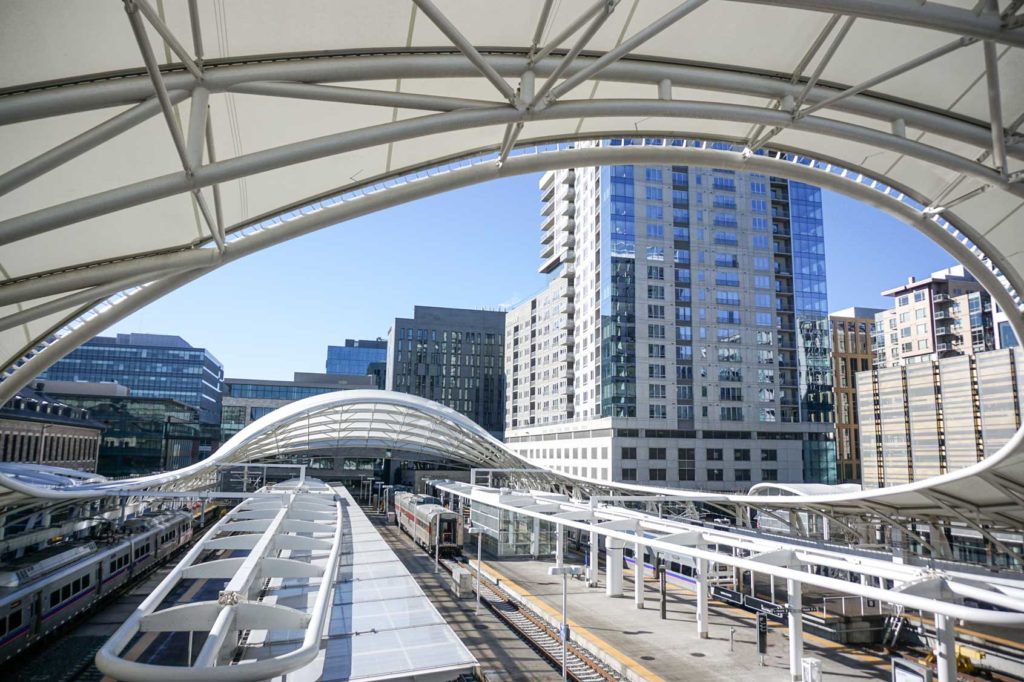 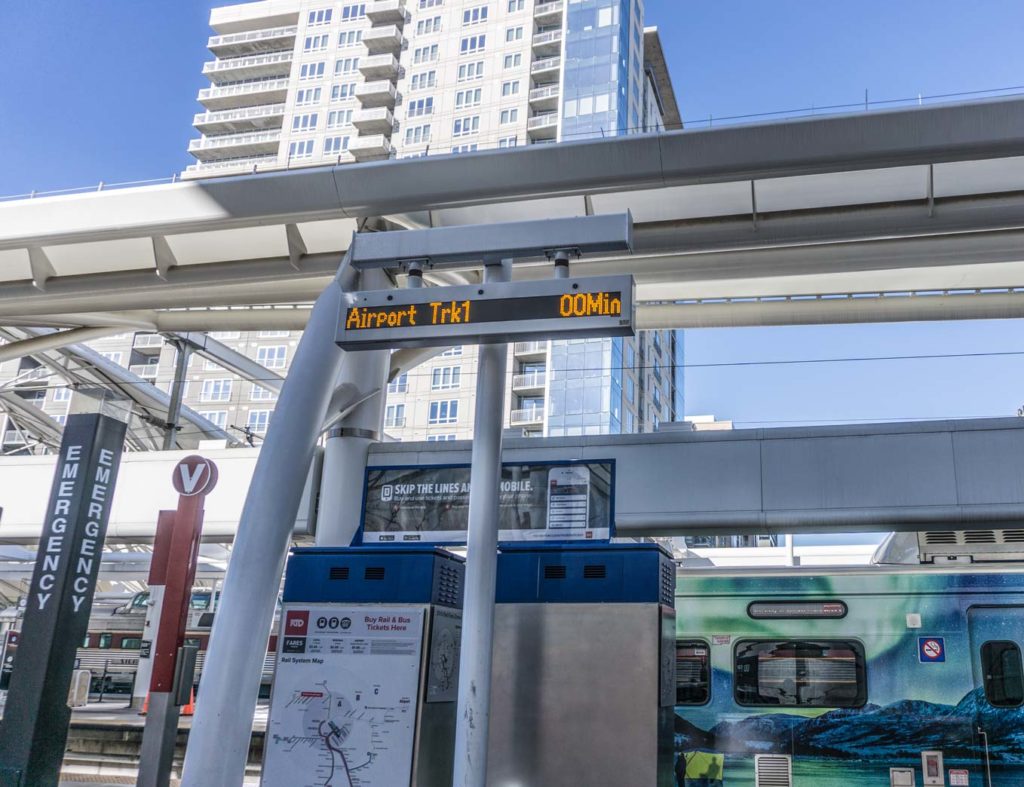 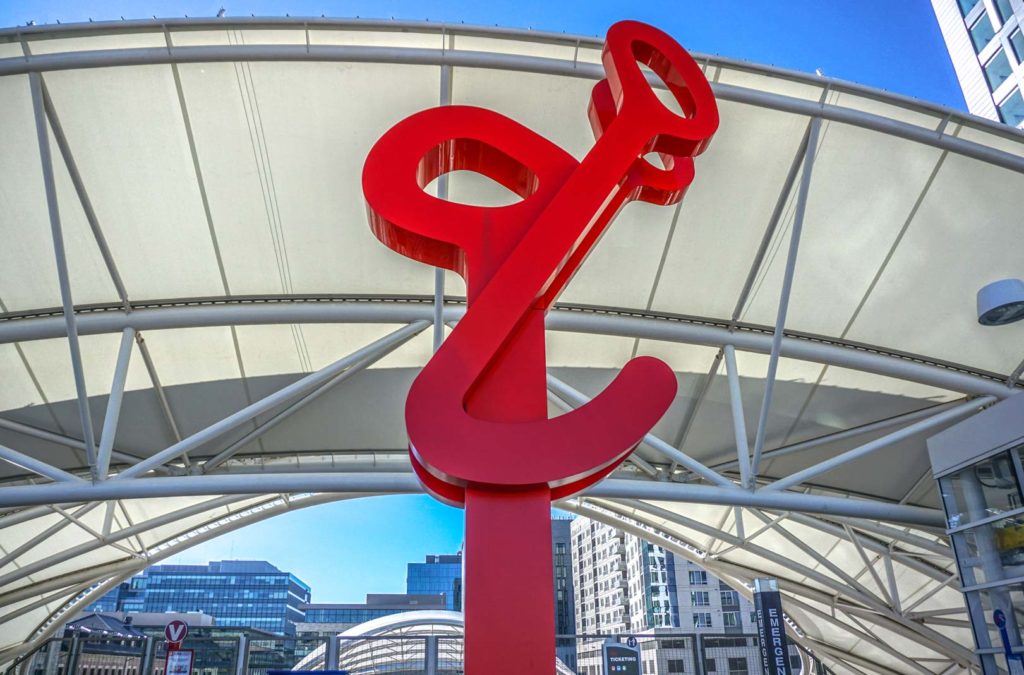 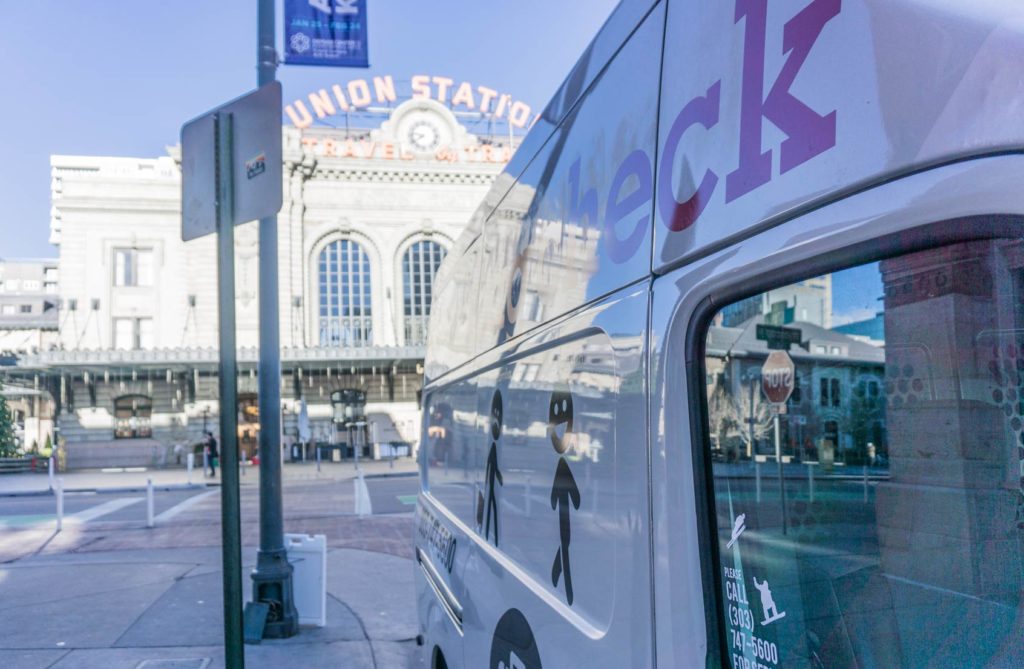 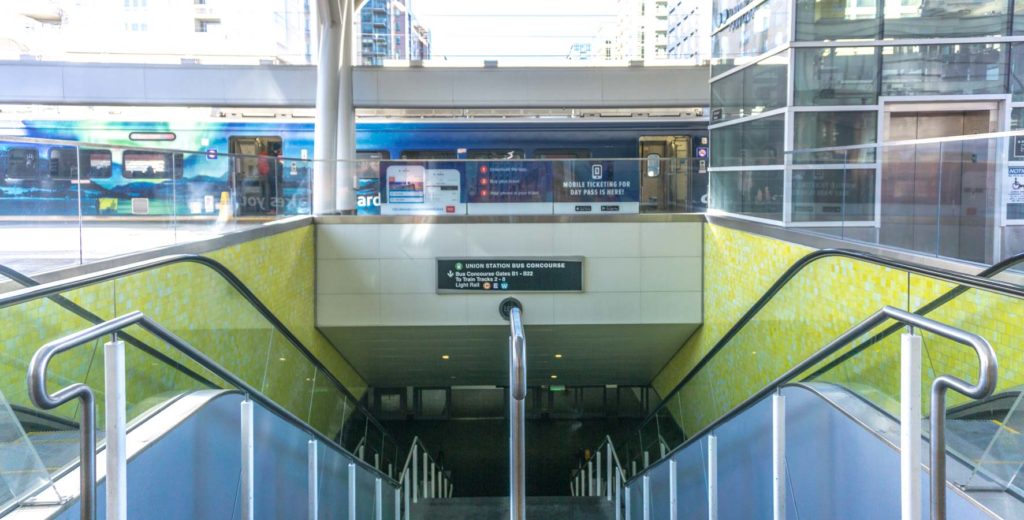 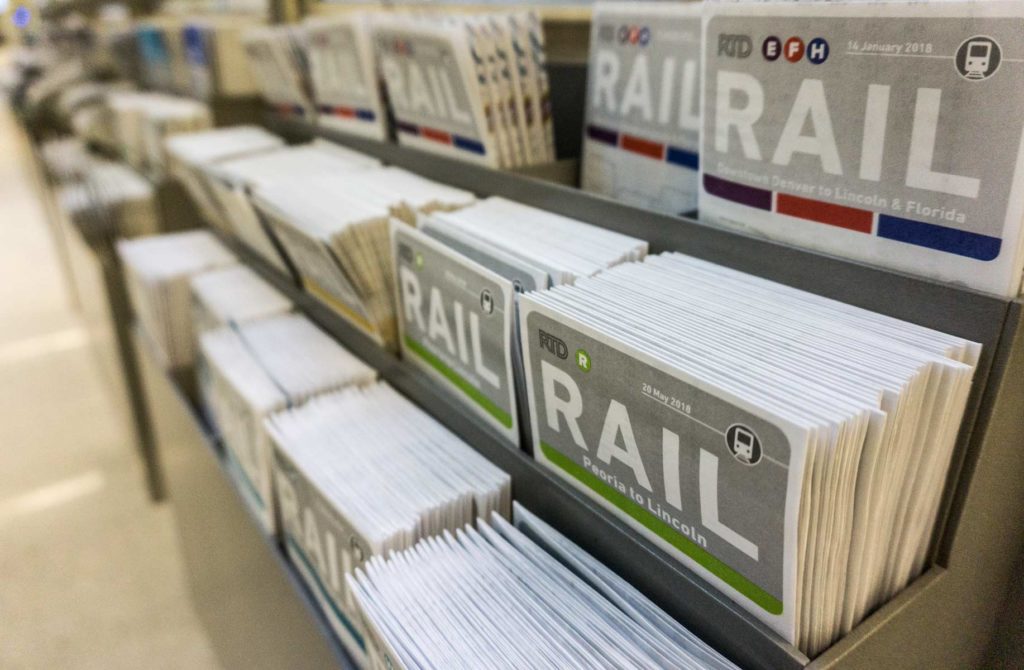 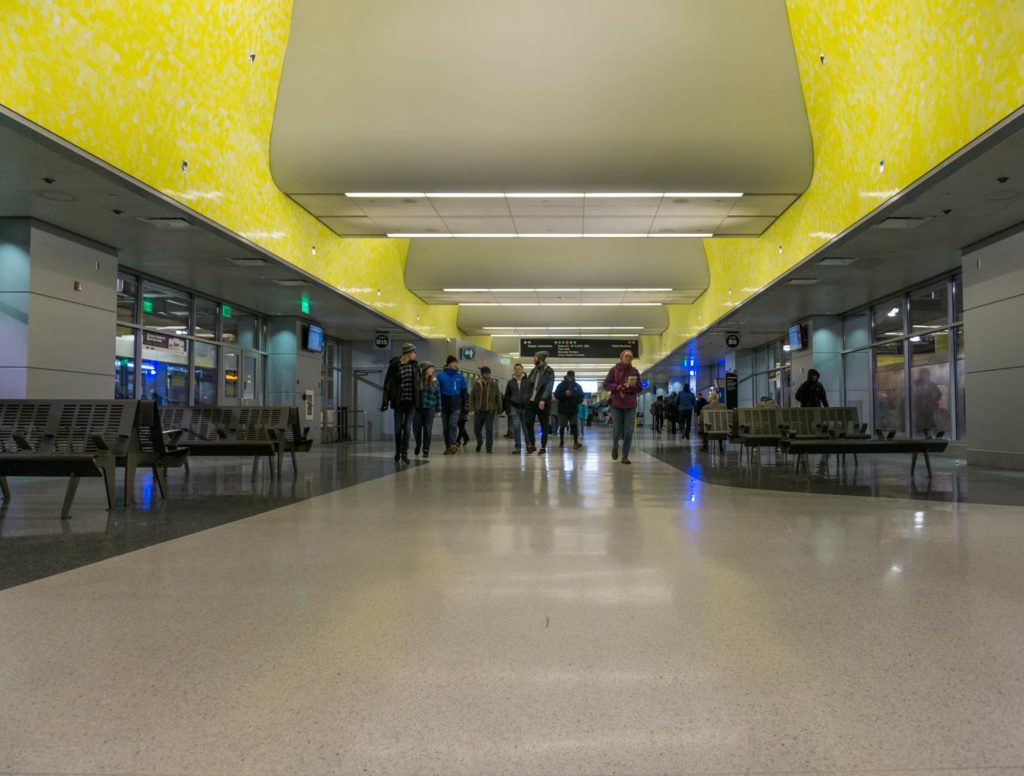 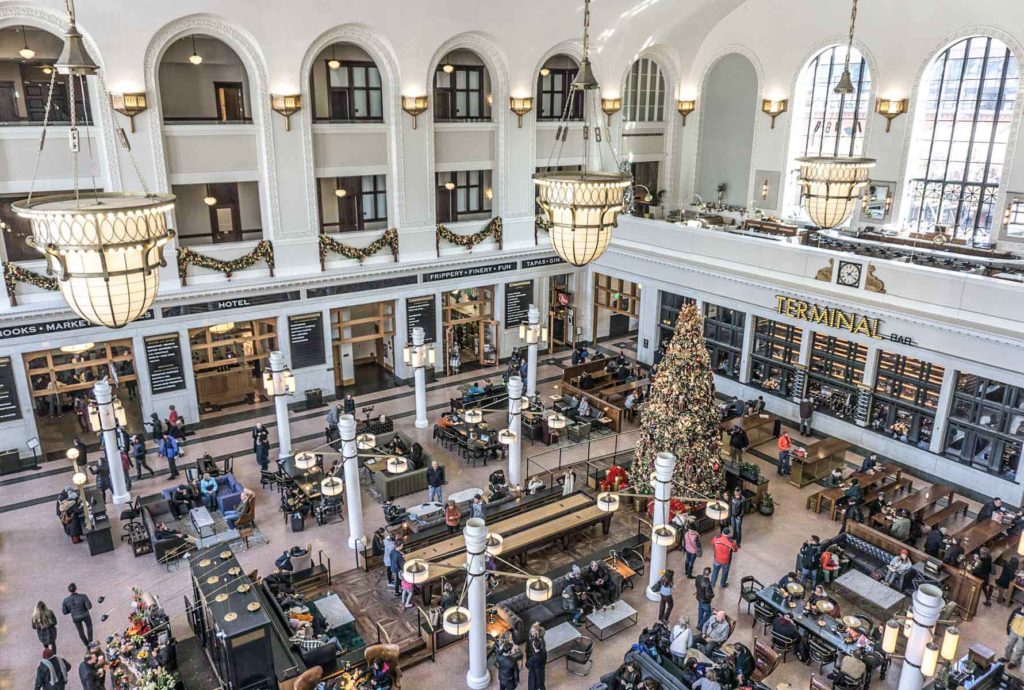 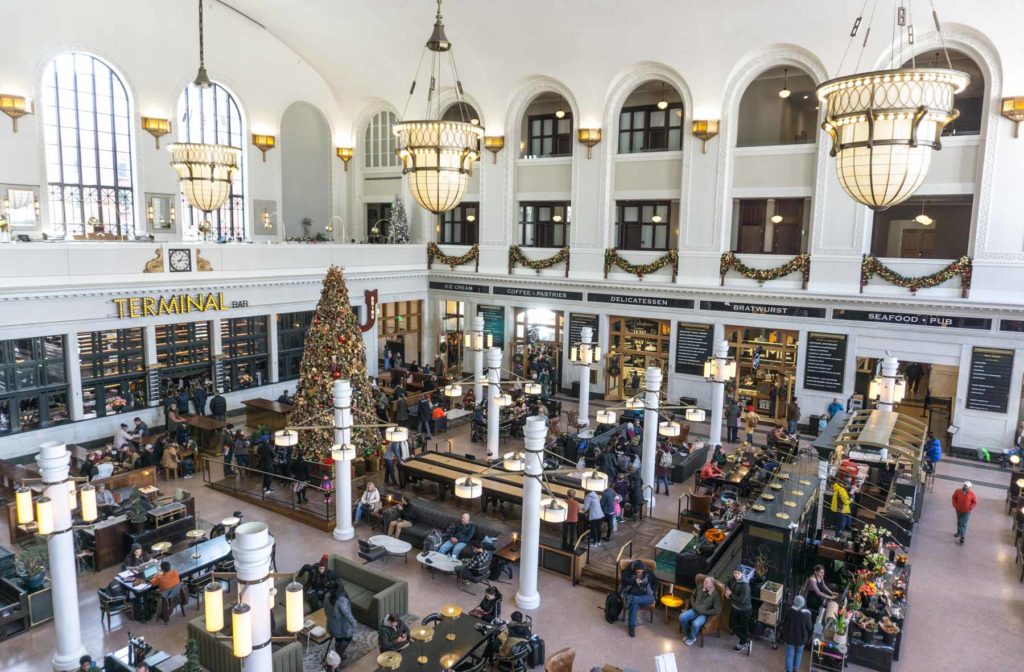 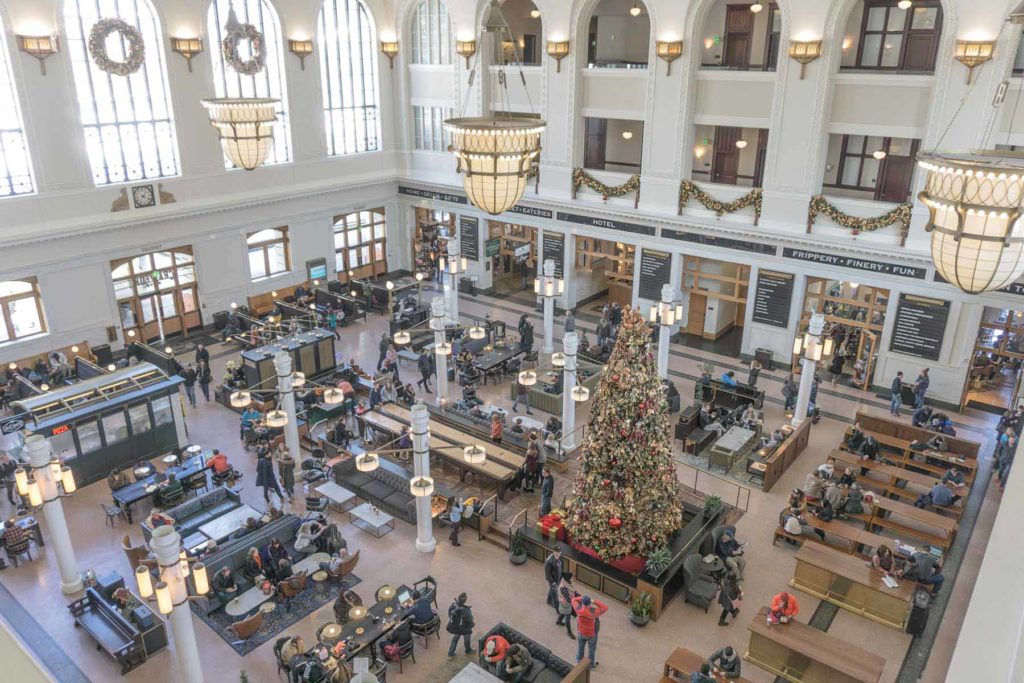 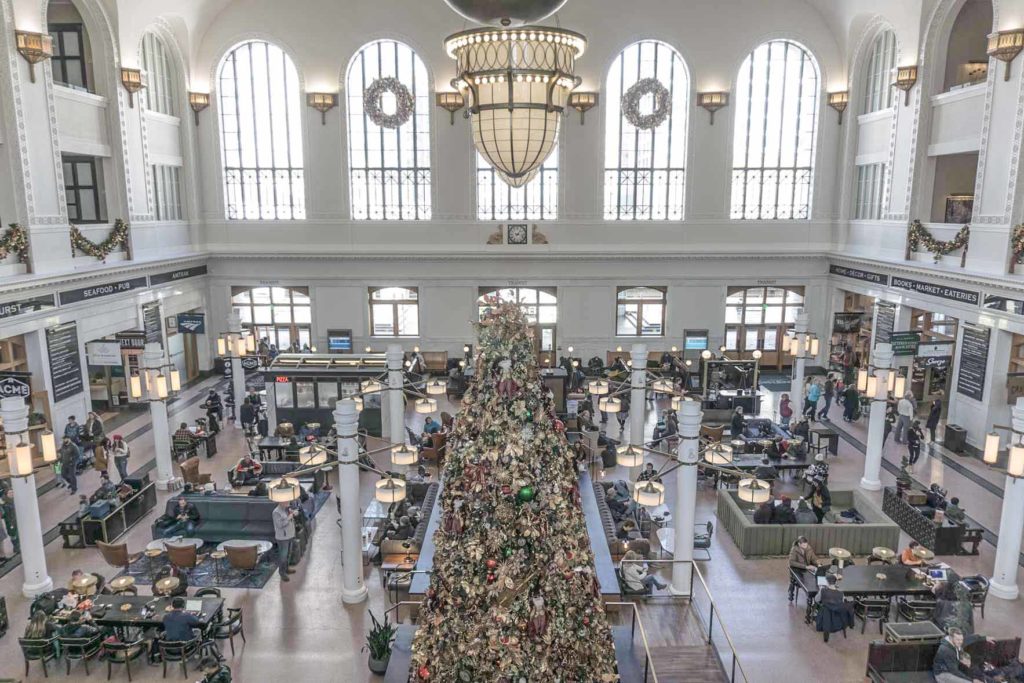 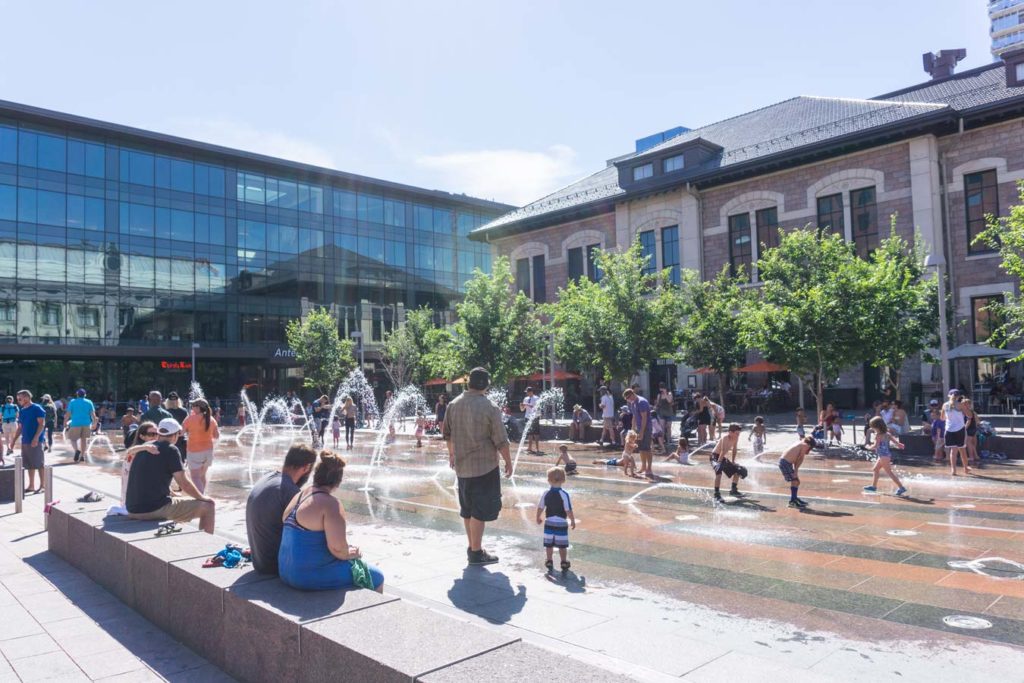 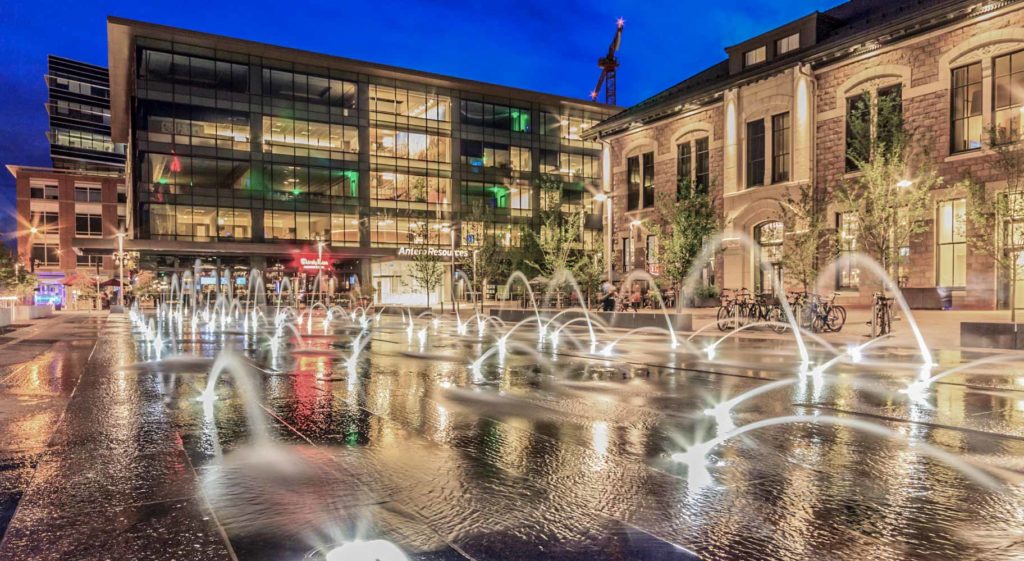 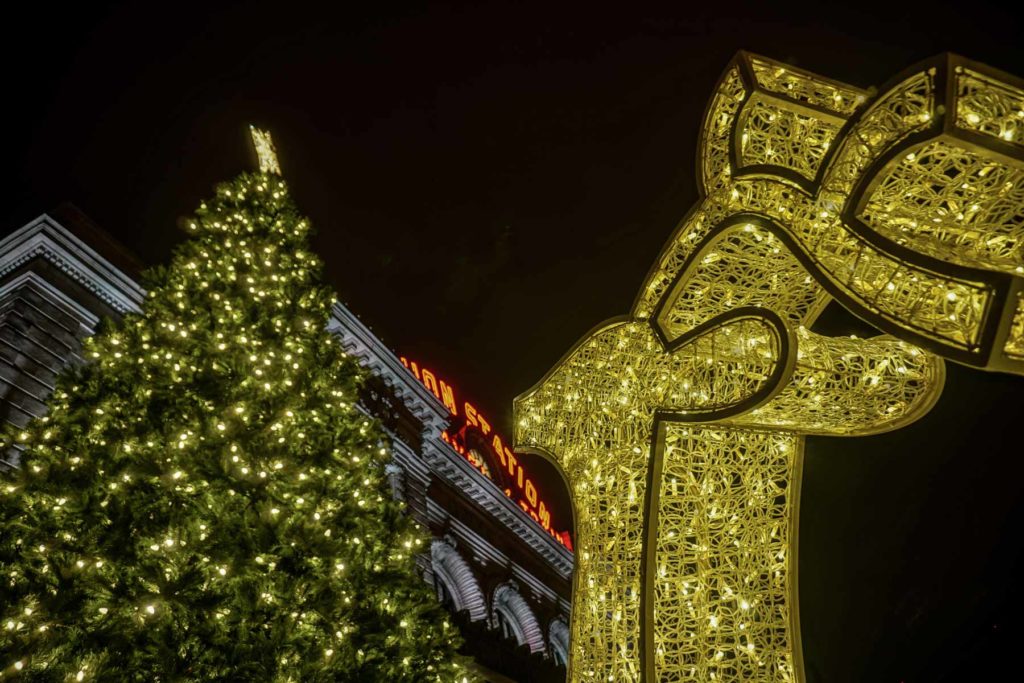 The revitalization of Union Station as a central hub for transportation and great food also brings with it an opulent holiday light display featuring a 40 foot christmas tree, animated icicle lights, and decorative, winter holiday illumination throughout the front plaza. 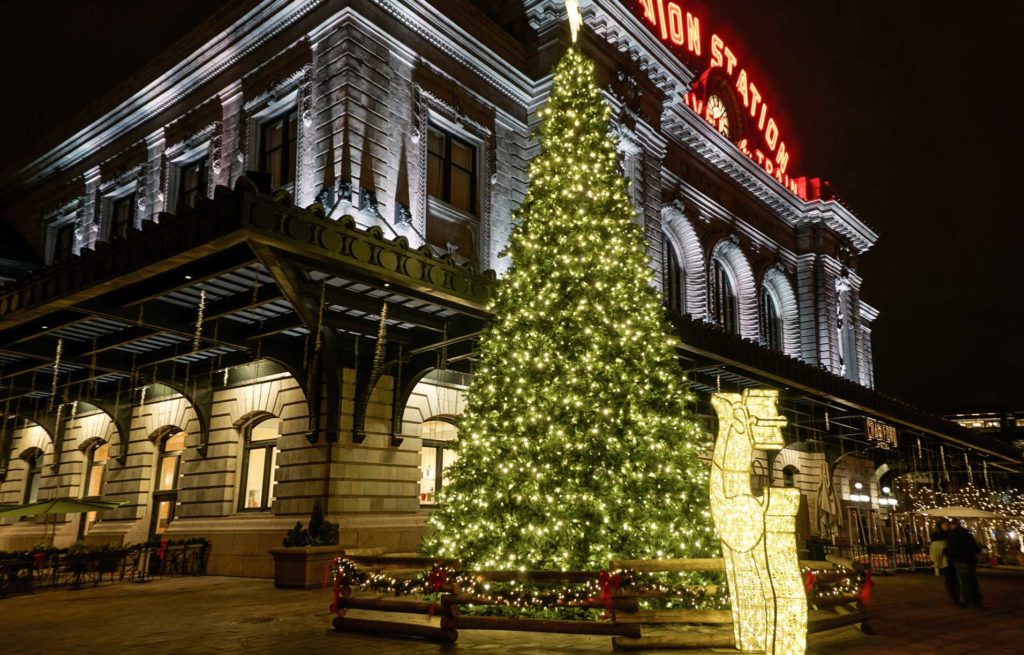 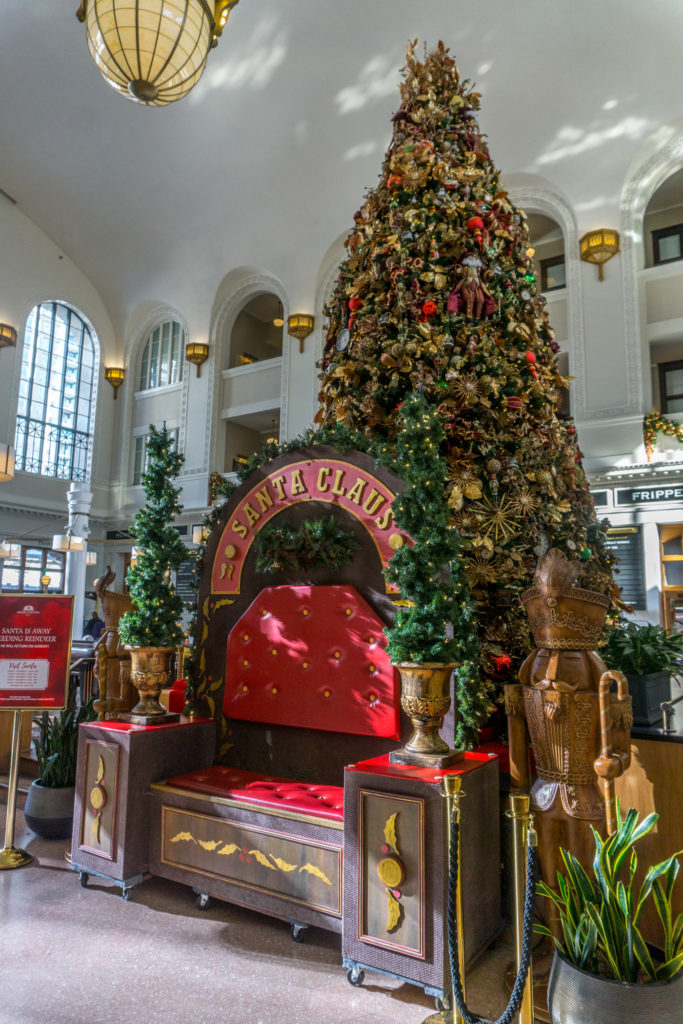 Inside Union Station grand hall sits a Santa Claus Photo Booth with a 30 foot christmas tree backdrop. There is an actual Santa on the weekends prior to Christmas so you can bring the kids or yourself to get a photo with Saint Nick.

The best selfies of you and your friends are taken from the east side of Wynkoop at either corner of 17th Street standing near the red bricks. See images below for the best location to take selfie pictures at Union Station in Denver. Standing too far away will include street signs and the lamp post. 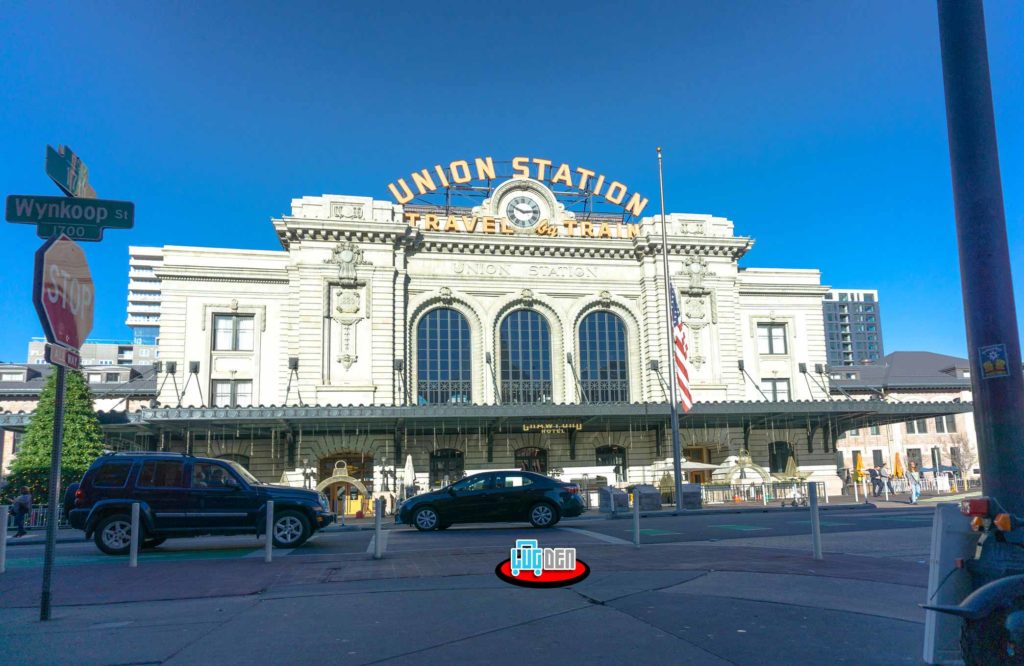 For the best elevated pictures of Union Station Grand Hall, you’ll need to cross Wynkoop walk a half a block to 1660 Wynkoop Parking Garage and take the elevator (or stairs) to the 7th floor. Walk to the north-west corner of the parking level and you will be able to take photos of Denver Union Station from a higher vantage point, just like the one you see below. 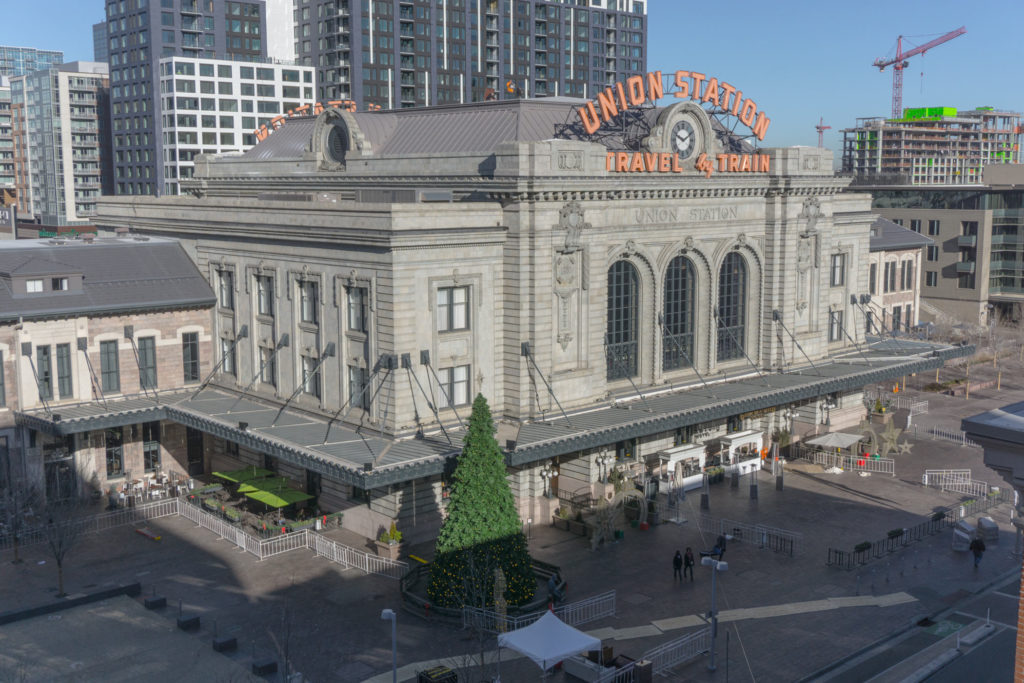